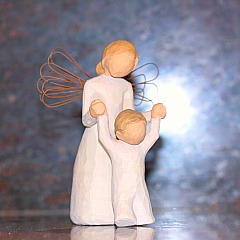 I'd been visiting friends in Frankfurt, Germany and was now traveling south, back to our home in Italy. My eighteen month old son was lying in his portable cot, safely strapped on the back seat of my husband’s Alfa Romeo.

This was in the days when there were no speed limits on the Autobahn and I'd just flown past Karlsruhe at approximately 9 p.m.  The road had three lanes and there was a fair amount of traffic, but the night was clear. The car made almost no noise as it glided smoothly and swiftly along the tarmac in the outside lane.

My son was fast asleep in the back, and I was listening to some music by Sting, including the track without lyrics which I played the day I discovered I was pregnant….

Soon I would reach the Swiss border, and drive through the long Gotthard Tunnel down to Italy and our house in Lombardy on Lago Varese.

I had lived, and driven fast, in Germany for eight years before moving to Italy, and my reactions on the road had become lightning quick during that period. Yet our Guardian Angels, not my fast thinking, saved us from certain death in the next moments.

A left curve came up on the Autobahn, but as I had driven down this road many times, I thought nothing of it. Then suddenly, bright headlights came straight at me.

Although my eyes registered the phenomenon, my brain was telling me this wasn't happening. It wasn’t normal for a car to be traveling the wrong way – at speed – head-on towards me! I did nothing about it for several seconds.

Our Guardian Angels took over, directing my hands on the steering wheel. I lurched the car to the right, traveling at over 120 mph. I had no time to check whether a car was next to me, but the angels created a gap between the many autos in that lane - a gap just big enough for me to fit in without hitting someone.

Half a second later the driver of the oncoming car passed on my left side.

Shock set in, and I started shaking. Tears weren't far behind and I couldn’t drive much further.

In Europe there are gas stations on the motorways, and I saw police cars outside the first one I reached. As I pulled up, the police were on their phones. Guessing they already knew about the Geisterfahrer – ghost driver – who'd narrowly missed me, I told them he’d just gone by. They thanked me for the information, and I climbed back into my car.

There But For the Grace of God

Still shaking, I remembered close friends who lived in the next town, Baden-Baden, some twenty minutes away. I drove gingerly to their house and was soon in their sitting room, watching the T.V. news report on the Geisterfahrer. He had just hit an oncoming car.

Both he and the other driver were instantly killed.

Note: Geisterfahrer is the name for drivers who – usually on a dare – see how far they can speed their cars up the Autobahn in the fast lane going the wrong way.